In many applications it is useful to prove membership of a data element in a set without having to reveal the entire contents of that set. The Merkle hash-tree, where inner/non-leaf nodes are labeled with the hash of the labels or values of its children, is a cryptographic tool that achieves this goal. Bitcoin uses a Merkle hash-tree construct for committing the transactions of a block into the block header. This particular design, created by Satoshi, suffers from a serious flaw related to duplicate entries documented in the National Vulnerability Database as CVE-2012-2459[1], and also suffers from less than optimal performance due to unnecessary double-hashing.

A Merkle hash-tree is a directed acyclic graph data structure where all non-terminal nodes are labeled with the hash of combined labels or values of the node(s) it is connected to. Bitcoin uses a unique Merkle hash-tree construct invented by Satoshi for calculating the block header commitment to the list of transactions in a block. While it would be convenient for new applications to make use of this same data structure so as to share implementation and maintenance costs, there are three principle drawbacks to reuse.

First, Satoshi's Merkle hash-tree has a serious vulnerability[1] related to duplicate tree entries that can cause bugs in protocols that use it. While it is possible to secure protocols and implementations against exploit of this flaw, it requires foresight and it is a bit more tricky to design secure protocols that work around this vulnerability. Designers of new protocols ought avoid using the Satoshi Merkle hash-tree construct where at all possible in order to responsibly decrease the likelihood of downstream bugs in naïve implementations.

Third, Satoshi's algorithm presumes construction of a tree index from an ordered list, and therefore is designed to support balanced trees with a uniform path length from root to leaf for all elements in the tree. Many applications, on the other hand, benefit from having unbalanced trees, particularly if the shorter path is more likely to be used. While it is possible to make a few elements of a Satoshi hash-tree have shorter paths than the others, the tricks for doing so are dependent on the size of the tree and not very flexible.

Together these three reasons provide justification for specifying a standard Merkle hash-tree structure for use in new protocols that fixes these issues. This BIP describes such a structure, and provides an example implementation.

A Merkle hash-tree as defined by this BIP is an arbitrarily-balanced binary tree whose terminal/leaf nodes are labelled with the double-SHA256 hashes of data, whose format is outside the scope of this BIP, and inner nodes with labels constructed from the fast-SHA256 hash of its children's labels. The following image depicts an example unbalanced hash-tree: 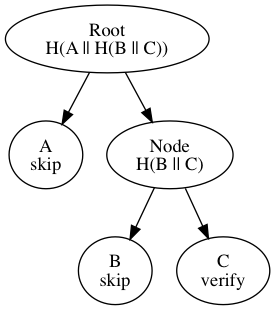 The fast-SHA256 cryptographic hash function takes two 32-byte hash values, concatenates these to produce a 64-byte buffer, and applies a single run of the SHA-256 hash function with a custom 'initialization vector' (IV) and without message paddding. The result is a 32-byte 'midstate' which is the combined hash value and the label of the inner node. The changed IV protects against path-length extension attacks (grinding to interpret a hash as both an inner node and a leaf). fast-SHA256 is only defined for two 32-byte inputs. The custom IV is the intermediate hash value generated after performing a standard SHA-256 of the following hex-encoded bytes and extracting the midstate:

This data is the first 512 fractional bits of the square root of 23, the 9th prime number. The resulting midstate is used as IV for the fast-SHA256 cryptographic hash function:

As fast-SHA256 is only defined for two (2) 32-byte hash inputs, there are necessarily two special cases: an empty Merkle tree is not allowed, nor is any root hash defined for such a "tree"; and a Merkle tree with a single value has a root hash label equal to that self-same value of the leaf branch, the only node in the tree (a passthrough operation with no hashing).

The application of fast-SHA256 to inner node label updates is safe in this limited domain because the inputs are hash values and fixed in number and in length, so the sorts of attacks prevented by message padding and double-hashing do not apply.

The 'initialization vector' for fast-SHA256 is changed in order to prevent a category of attacks on higher level protocols where a partial collision can serve as both a leaf hash and as an inner node commitment to another leaf hash. The IV is computed using standard SHA-256 plus midstate extraction so as to preserve compatibility with cryptographic library interfaces that do not support custom IVs, at the cost of a 2x performance hit if neither custom IVs nor resuming from midstate are supported. The data hashed is a nothing-up-my-sleeve number that is unlikely to have a known hash preimage. The prime 23 was chosen as the leading fractional bits of the first eight (8) primes, two (2) through nineteen (19), are constants used in the setup of SHA-256 itself. Using the next prime in sequence reduces the likelihood of introducing weakness due to reuse of a constant factor.

The Merkle root hash of a single element tree is a simple pass-through of the leaf hash without modification so as to allow for chained validation of split proofs. This is particularly useful when the validation environment constrains proof sizes, such as push limits in Bitcoin script. Chained validation allows a verifier to split one proof into two or more, where the leaf is shown to be under an inner node, and that inner node is shown to be under the root. Without pass-through hashing in a single-element tree, use of chained validation would unnecessarily introduce a minimum path length requirement equal to the number of chain links. Pass-through hashing of single elements allows instead for one or more of the chained validations to use a "NOP" proof consisting of a zero-length path, thereby allowing, for example, a fixed series of four (4) chained validations to verify a length three (3) or shorter path.

An important use of Merkle hash-trees is the ability to compactly prove membership with log-sized proofs. This section specifies a standard encoding for a multi-element inclusion proof.

To prove that a set of hashes is contained within a Merkle tree with a given root requires four pieces of information:

Typically the last two elements, the paths and the elided branch hashes, are lumped together and referred to as the proof.

Serialization begins with a variable-length integer (VarInt) used to encode N, the number of internal nodes in the proof. Next the structure of the tree is traversed using depth-first, left-to-right, pre-order algorithm to visit each internal nodes, which are serialized using a packed 3-bit representation for the configuration of each node, consuming (3*N + 7) / 8 bytes. Then the number skipped hashes (those included in the proof, not verified by the proof) is serialized as a variable-length integer (VarInt), followed by the hashes themselves in the order previously traversed.

There are eight possible configurations of internal nodes, as given in the following diagram: 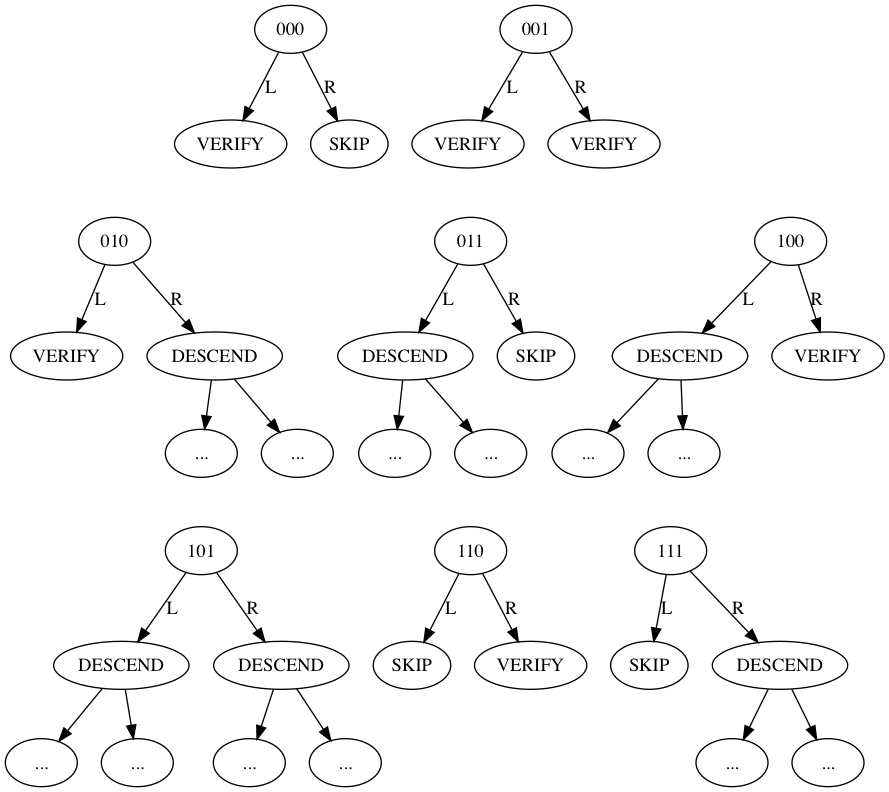 These 3-bit codes are packed into a byte array such that eight (8) codes would fit in every three (3) bytes. The order of filling a byte begins with the most significant bit 0x80 and ends with the least significant bit 0x01. Unless the number of inner nodes is a multiple of eight (8), there will be excess low-order bits in the final byte of serialization. These excess bits must be zero. 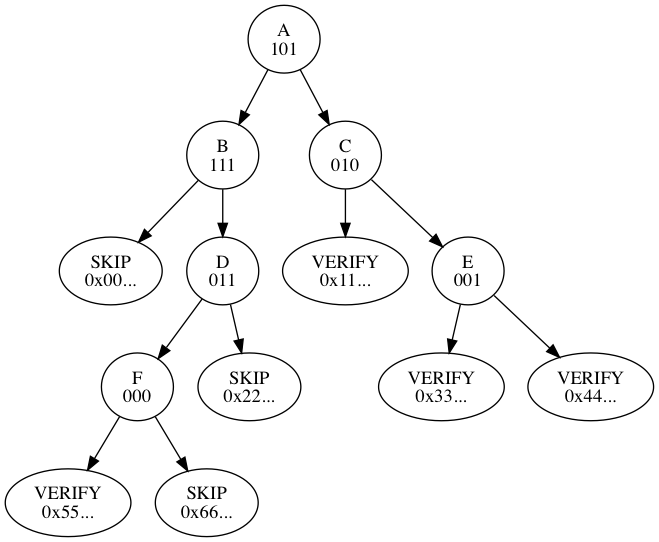 The 3-bit encoding for inner nodes allows encoding all relevant configurations of the nodes where the left and right branches can each be one of {DESCEND, SKIP, VERIFY}. The excluded 9th possibility would have both branches as SKIP: 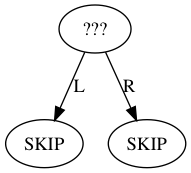 This possibility is not allowed as for verification purposes it is entirely equivalent to the shorter proof where the branch to that node was SKIP'ed. Disallowing a node with two SKIP branches eliminates what would otherwise be a source of proof malleability.

The number of hashes required as input for verification of a proof is N+1 minus the number of SKIP hashes, and can be quickly calculated without parsing the tree structure.

The coding and packing rules for the serialized tree structure were also chosen to make lexigraphical comparison useful (or at least not meaningless). If we consider a fully-expanded tree (no SKIP hashes, all VERIFY) to be encoding a list of elements in the order traversed depth-first from left-to-right, then we can extract proofs for subsets of the list by SKIP'ing the hashes of missing values and recursively pruning any resulting SKIP,SKIP nodes. Lexigraphically comparing the resulting serialized tree structures is the same as lexigraphically comparing lists of indices from the original list verified by the derived proof.

Because the number of inner nodes and the number of SKIP hashes is extractible from the tree structure, both variable-length integers in the proof are redundant and could have been omitted. However that would require either construction and storage of the explicit tree in memory at deserialization time, or duplication of the relatively complicated tree parsing code in both the serialization and verification methods. For that reason (as well as to handle the single-hash edge case) the redundant inner node and SKIP hash counts are made explicit in the serialization, and the two values must match what is inferred from the tree structure for a proof to be valid. This makes deserialization trivial and defers tree construction until verification time, which has the additional benefit of enabling log-space verification algorithms.

Many applications use a Merkle tree to provide indexing of, or compact membership proofs about the elements in a list. This addendum specifies an algorithm that constructs a canonical balanced tree structure for lists of various lengths. It differs in a subtle but important way from the algorithm used by Satoshi so as to structurally prevent the vulnerability described in [1].

This algorithm differs from Merkle lists used in bitcoin in two ways. First, fast-SHA256 is used instead of double-SHA256 for inner node labels. Second, final entries on an odd-length list are not duplicated and hashed, which is the mistake that led to CVE-2012-2459[1].

An implementation of this BIP for extraction of Merkle branches and fast, log-space Merkle branch validation is available at the following Github repository:

Also included in this repo is a 'merklebranch' RPC for calculating root values and extracting inclusion proofs for both arbitrary trees and trees constructed from lists of values using the algorithm in this BIP, and a 'mergemerklebranch' RPC for unifying two or more fast Merkle tree inclusion proofs--replacing SKIP hashes in one proof with a subtree extracted from another.

This BIP is used by BIP116 (MERKLEBRANCHVERIFY)[4] to add Merkle inclusion proof verification to script by means of a soft-fork NOP expansion opcode. Deployment of MERKLEBRANCHVERIFY would make the contents of this BIP consensus critical. The deployment plan for BIP116 is covered in the text of that BIP.

This BIP on its own does not cause any backwards incompatibility.

[2] github.com:sipa/bitcoin 201709_dsha256_64 Pieter Wuille, September 2017, personal communication. By making use of knowledge that the inputs at each stage are fixed length, Mr. Wuille was able to achieve a 22.7% reduction in the time it takes to compute the double-SHA256 hash of 64 bytes of data, the hash aggregation function of the Satoshi Merkle tree construction.