This BIP defines a technique for creating a payment code which can be publicly advertised and associated with a real-life identity without creating the loss of security or privacy inherent to P2PKH address reuse.

This BIP is a particular application of BIP43 and is intended to supplement HD wallets which implement BIP44.

Payment codes add identity information to transactions which is useful in a merchant-customer interaction while protecting the privacy of users. Payment codes provide the privacy benefits of Darkwallet-style Stealth Addresses to SPV clients without requiring the assistance of a trusted full node and while greatly reducing reliance on blockchain storage.

We define the following 3 levels in BIP32 path:

The child keys derived from an identity are used in different ways:

The 0th (non-hardened) child is the notification key.

These (non-hardened) keypairs are used for ECDH to generate deposit addresses.

Apostrophe in the path indicates that BIP32 hardened derivation is used.

Each level has a special meaning, described in the chapters below.

Purpose is a constant set to 47' (or 0x8000002F) following the BIP43 recommendation. It indicates that the subtree of this node is used according to this specification.

Hardened derivation is used at this level.

When the extended public key at this level is combined with the metadata specified in the Representation section below, the resulting entity is called a "payment code."

This derivation level is equivalent to the Account level in BIP-44. Wallets SHOULD treat payment codes as intrinsically part of the BIP-44 account at the same index and create payment codes and accounts as pairs.

The second account in a wallet consists of the new account/payment code pair created by using an index of 1 in as the account/identity level of both paths.

Hardened derivation is used at this level.

Except where noted, all keys derived from a payment code use the public derivation method.

Payment codes contain a version byte which identifies a specific set of behavior.

When a payment code is presented to the user, it SHOULD be presented encoded in Base58Check form.

In the following examples, Alice and Bob are identities with a corresponding payment codes. Alice initiates a Bitcoin transaction, and Bob is the recipient of the transaction.

It is assumed that Alice can easily obtain Bob's payment code via a suitable method outside the scope of the payment code protocol.

Prior to the first time Alice initiates a transaction to Bob, Alice MUST inform Bob of her payment code via the following procedure:

Note: this procedure is used if Bob uses a version 1 payment code (regardless of the the version of Alice's payment code). If Bob's payment code is not version 1, see the appropriate section in this specification. 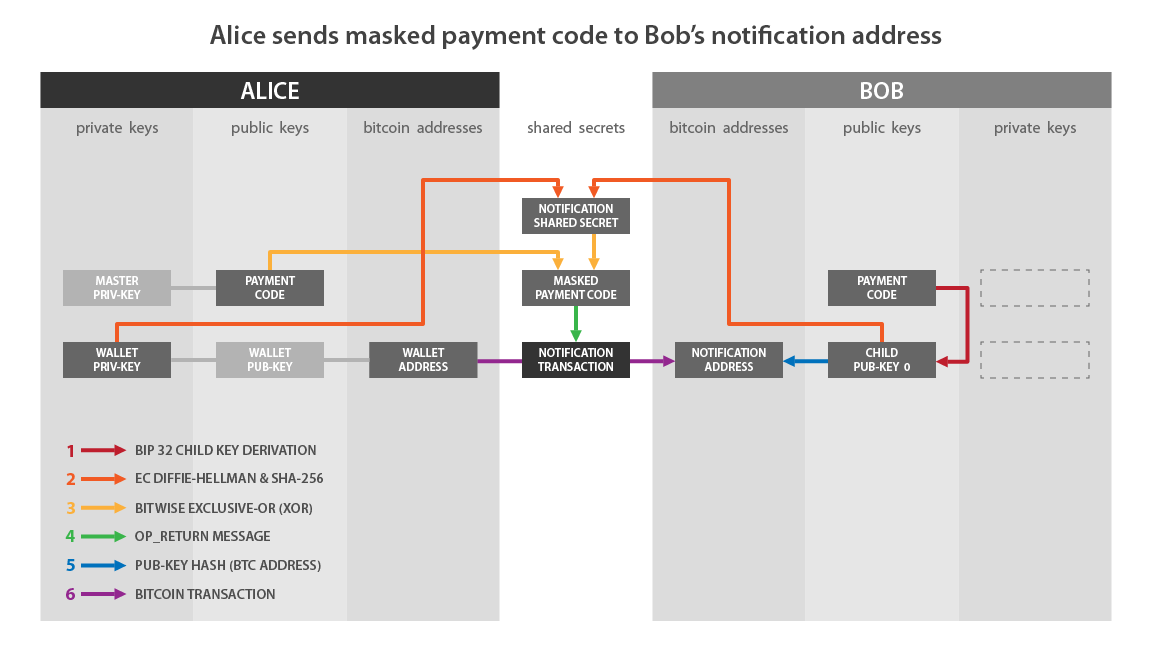 Now that Bob's client has received Alice's payment code, it is possible for Alice to send payments (up to 232 payments) to Bob.

Alice will never again need to send a notification transaction to Bob.

Alice SHOULD use an input script in one of the following standard forms to expose a public key, and compliant applications SHOULD recognize all of these forms.

Incautious handling of change outputs from notification transactions may cause unintended loss of privacy.

The following actions are recommended to reduce this risk: 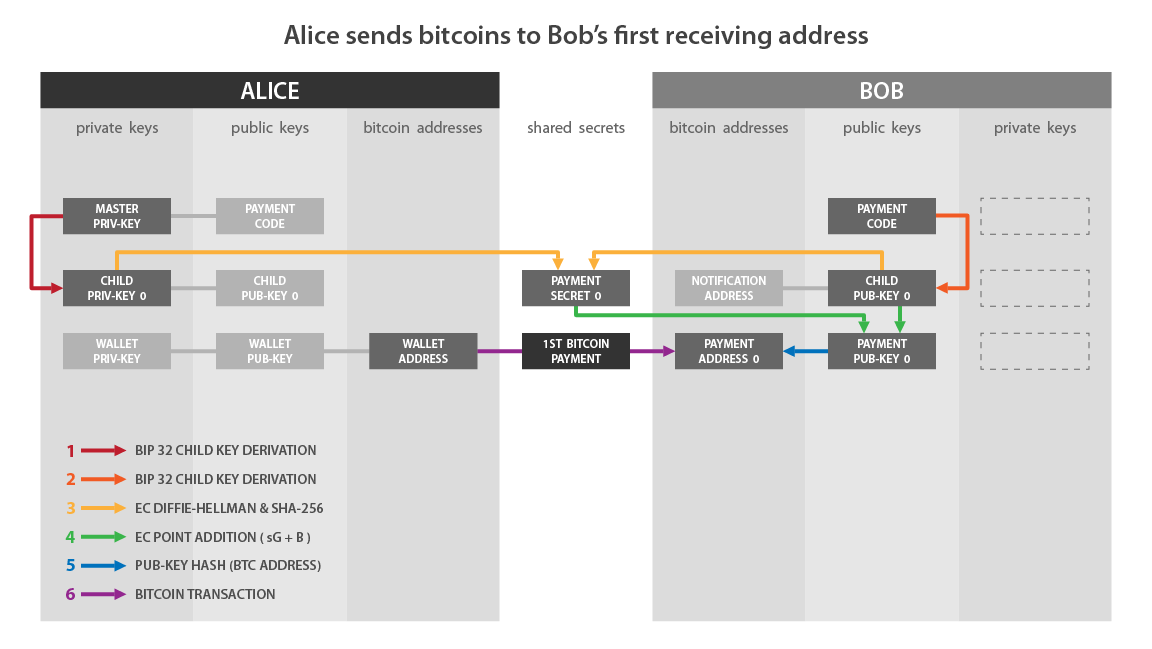 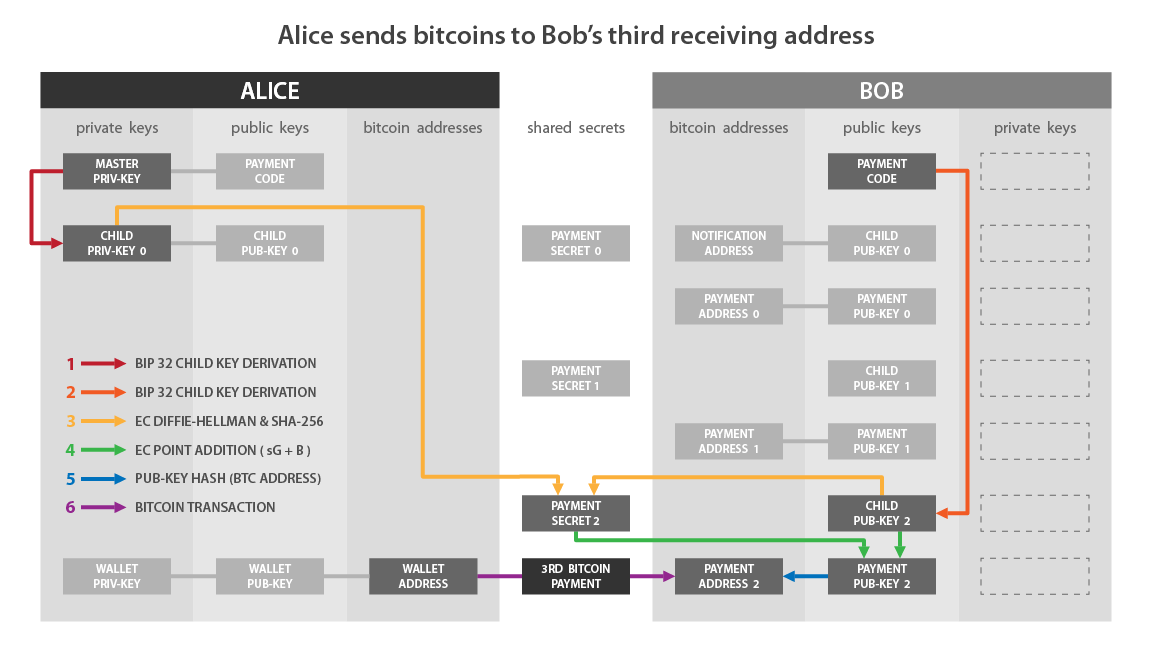 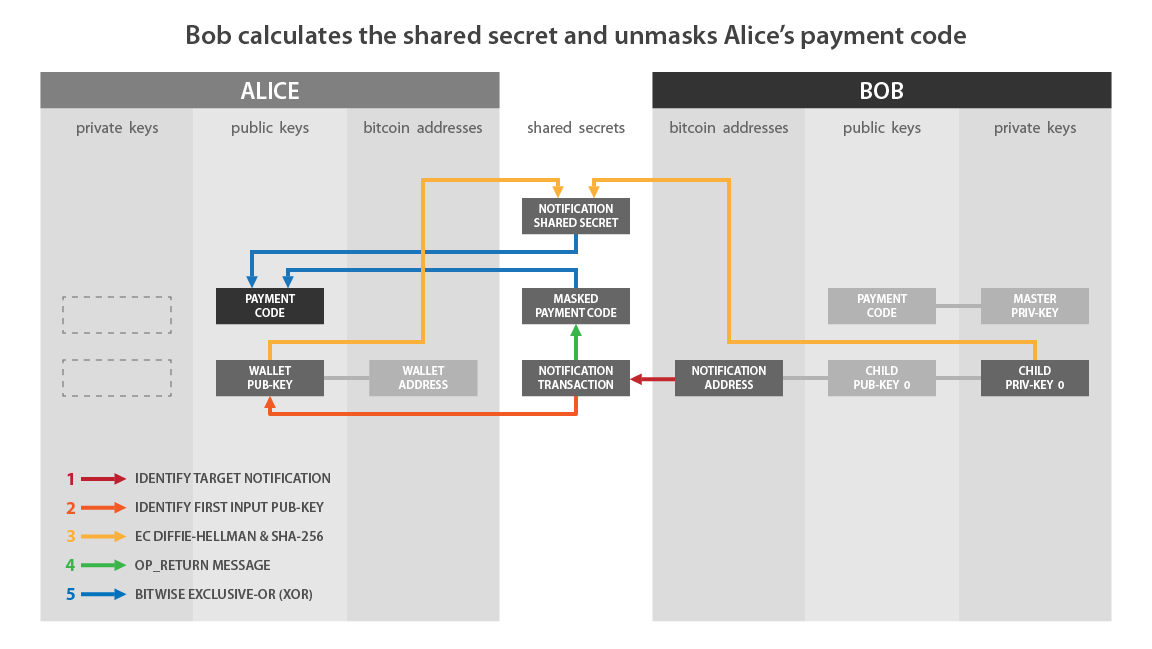 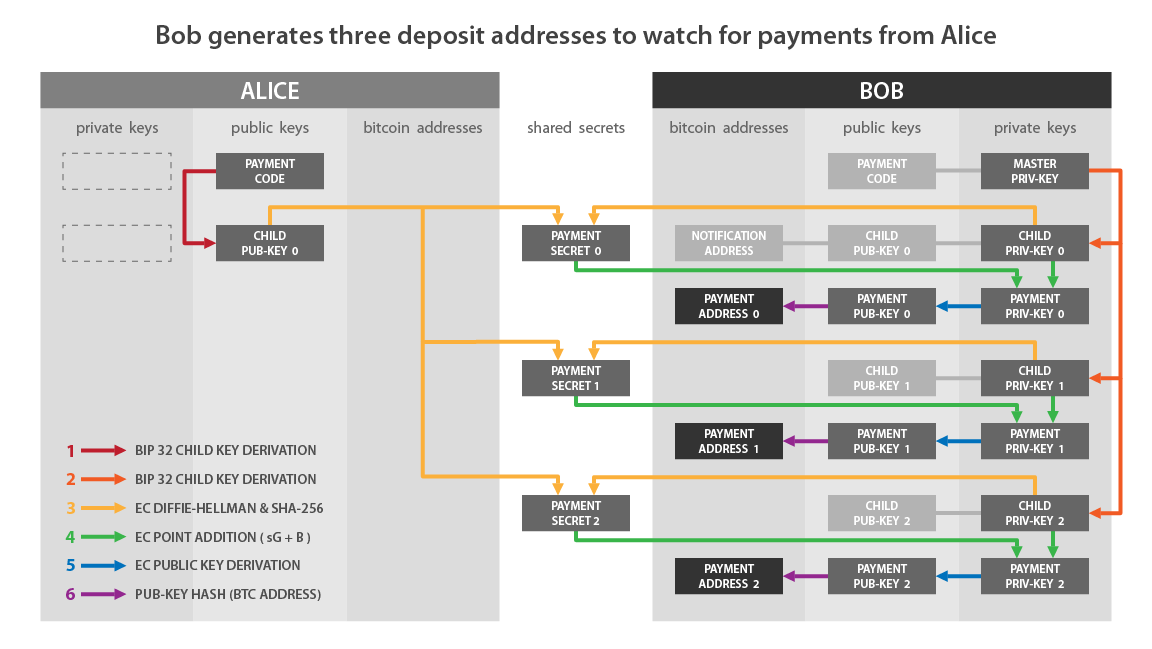 Because Bob learns Alice's payment code as part of the process of receiving a payment, Bob has all the information he needs in order to send a refund to Alice.

A refund transaction is identical to a payment transactions, with only the roles of the participants switches.

Bob MUST send a notification transaction to Alice prior to the first time he sends funds to Alice, even if he has received transactions from her in the past. 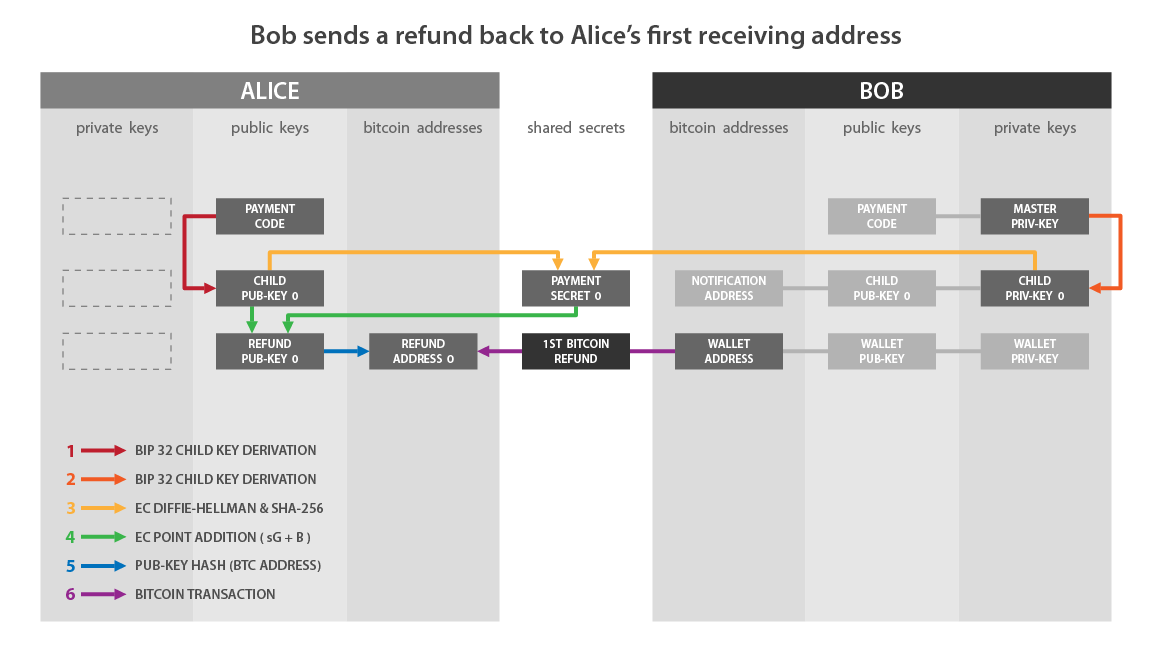 If Alice does not want her payment to Bob to be associated with her identity, she generates an ephemeral payment code to use for the transaction.

Normal operation of a payment code-enabled wallet can be performed by an SPV client and does not require access to a complete copy of the blockchain.

Recovering a wallet from a seed, however, does require access to a fully-indexed blockchain.

The required data may be obtained from copy of the blockchain under the control of the user, or via a publicly-queriable blockchain explorer.

When querying a public blockchain explorer, wallets SHOULD connect to the explorer through Tor (or equivalent) and SHOULD avoid grouping queries in a manner that associates ephemeral addresses with each other.

Previously-spendable funds will generally not be lost or become inaccessible after a recovery from a seed, but all information regarding previous outgoing payments will be lost.

In order to recover received funds from a seed, the wallet must obtain every notification it has ever received to its notification address, including all spent transactions. It then re-establishes its lookahead window for each subchain by scanning every derived address sequentially until it locates a contiguous block of unused addresses of a user-specified length.

The metadata which a wallet must store to properly process outgoing transactions consists of:

Wallets using payment codes generally should not be shared across multiple devices, given the need to synchronize metadata between each instance.

If wallets are shared between devices without a synchronization mechanism, undesirable address reuse can occur.

Wallets may perform an OPTIONAL check for existing transactions to an ephemeral deposit addresses prior to sending a transaction by checking a local copy of the blockchain or querying a public blockchain explorer via Tor or equivalent.

In order to ensure that no funds will be lost in the event the recipient must recover their wallet from a seed, the sender MUST send a notification transaction the first time the sender interacts with a particular recipient.

A recipient MAY choose to designate alternate notification methods which the sender may use in addition to a notification transaction.

A recipient specifies their preference for alternate notification by setting the appropriate bits in the feature byte of their payment code.

A recipient which prefers to receive notifications via Bitmessage indicates this preference by:

In order to use Bitmessage notification, the recipient must have a Bitmessage client which listens at the address which the senders will derive and is capable of relaying received payment codes to the Bitcoin wallet.

Note: this procedure is used if Bob uses a version 2 payment code (regardless of the the version of Alice's payment code). If Bob's payment code is not version 2, see the appropriate section in this specification.

Alice's wallet should spend the notification change output at the next appropriate opportunity.