Bip300 emphasizes slow, transparent, auditable transactions which are easy for honest users to get right and very hard for dishonest users to abuse. The chief design goal for Bip300 is partitioning -- users may safely ignore Bip300 txns if they want to (or Bip300 entirely).

See this site for more information.

As Reid Hoffman wrote in 2014: "Sidechains allow developers to add features and functionality to the Bitcoin universe without actually modifying the Bitcoin Core code...Consequently, innovation can occur faster, in more flexible and distributed ways, without losing the synergies of a common platform with a single currency."

Software improvements to Bitcoin rely on developer consensus -- BTC will pass on a good idea if it is even slightly controversial. Development is slow: we are now averaging one major feature every 5 years.

Sidechains allow for competitive "benevolent dictators" to create a new sidechain at any time. These dictators are accountable only to their users, and (crucially) they are protected from rival dictators. Users can move their BTC among these different pieces of software, as *they* see fit.

BTC can copy every useful technology, as soon as it is invented; scamcoins lose their justification and become obsolete; and the community can be pro-creativity, knowing that Layer1 is protected from harmful changes.

D2 is driven by M3, M4, M5, and M6. Those messages enforce the following principles:

First, how are new sidechains created?

They are first proposed (with M1), and later acked (with M2). This process resembles Bip9 soft fork activation.

M1 is a coinbase OP Return output containing the following: 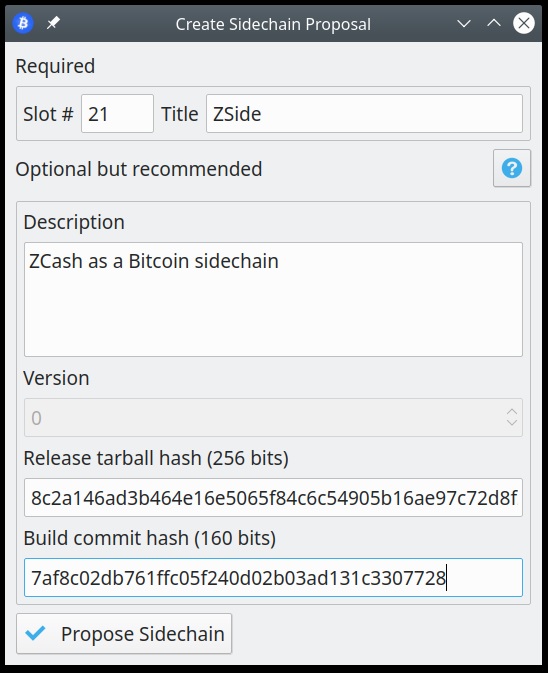 M2 is a coinbase OP Return output containing the following:

The new M1/M2 validation rules are:

Sidechain withdrawals take the form of “Bundles” -- named because they "bundle up" many individual withdrawal-requests into a single rare layer1 transaction.

This 32-byte hash is what miners will be slowly ACKing over 3-6 months, not the M6 itself (nor any sidechain data, of course).

A bundle either pays all its withdrawals out (via M6), or else it fails (and pays nothing out).

The Bundle hash is static as it is being ACKed. Unfortunately, the M6 TxID will be constantly changing -- as users deposit to the sidechain, the input to M6 will change.

To solve this problem, we do something conceptually similar to AnyPrevOut (BIP 118). We define a "blinded TxID" as a way of hashing a txn, in which some bytes are first overwritten with zeros. These are: the first input and the first output. Via the former, a sidechain can accept deposits, even if we are acking a TxID that spends from it later. Via the latter, we can force all of the non-withdrawn coins to be returned to the sidechain (even if we don't yet know how many coins this will be).

M3 is a coinbase OP Return output containing the following:

The new validation rules pertaining to M3 are:

Once a Bundle is in D2, how can we give it enough ACKs to make it valid?

M4 is a coinbase OP Return output containing the following:

Version 0x01 uses one byte per sidechain, and applies in most cases. Version 0x02 uses two bytes per sidechain and applies in unusual situations where at least one sidechain has more than 256 distinct withdrawal-bundles in progress at one time. Other interesting versions are possible: 0x03 might say "do exactly what was done in the previous block" (which could consume a fixed 6 bytes total, regardless of how many sidechains). 0x04 might say "upvote everyone who is clearly in the lead" (which also would require a mere 6 bytes), and so forth.

If a sidechain has no pending bundles, then it is skipped over when M4 is created and parsed.

The M4 message will be invalid (and invalidate the block), if it tries to upvote a Bundle that doesn't exist (for example, trying to upvote the 7th bundle on sidechain #2, when sidechain #2 has only three bundles). If there are no Bundles at all (no one is trying to withdraw from any sidechain), then *any* M4 message present in the coinbase will be invalid. If M4 is NOT present in a block, then it is treated as "abstain".

The ACKed withdrawal will gain one point for its ACK field. Therefore, the ACK-counter of any Bundle can only change by (-1,0,+1).

Within a sidechain-group, upvoting one Bundle ("+1") requires you to downvote all other Bundles in that group. However, the minimum ACK-counter is zero. While only one Bundle can be upvoted at once; the whole group can all be unchanged at once ("abstain"), and they can all be downvoted at once ("alarm").

Finally, we describe Deposits and Withdrawals.

Both M5 and M6 are regular Bitcoin txns. They are distinguished from regular txns (non-M5 non-M6 txns), when they select one of the special Bip300 CTIP UTXOs as one of their inputs (see D1).

All of a sidechain’s coins, are stored in one UTXO, called the "CTIP". Every time a deposit or withdrawal is made, the CTIP changes. Each deposit/withdrawal will select the sidechains CTIP, and generate a new CTIP. (Deposits/Withdrawals never cause UTXO bloat.) The current CTIP is cached in D1 (above).

If the quantity of coins, in the from-CTIP-to-CTIP transaction, goes up, (ie, if the user is adding coins), then the txn is treated as a Deposit (M5). Else it is treated as a Withdrawal (M6). See here.

As far as mainchain consensus is concerned, all deposits to a sidechain are always valid.

M6 -- Withdraw BTC from a Sidechain

We come, finally, to the critical matter: where users can take their money *out* of the sidechain.

First, M6 must obey the same CTIP rules of M5 (see immediately above).

Third, M6 must meet two accounting criteria, lest it be invalid:

As a soft fork, older software will continue to operate without modification. Non-upgraded nodes will see a number of phenomena that they don't understand -- coinbase txns with non-txn data, value accumulating in anyone-can-spend UTXOs for months at a time, and then random amounts leaving these UTXOs in single, infrequent bursts. However, these phenomena don't affect them, or the validity of the money that they receive.

( As a nice bonus, note that the sidechains themselves inherit a resistance to hard forks. The only way to guarantee that all different sidechain-nodes will always report the same Bundle, is to upgrade sidechains via soft forks of themselves. )

This BIP will be deployed via UASF-style block height activation. Block height TBD.

This BIP is licensed under the BSD 2-clause license.