Bitcoin's transaction spreading protocol is vulnerable to deanonymization attacks. Dandelion is a transaction routing mechanism that provides formal anonymity guarantees against these attacks. When a node generates a transaction without Dandelion, it transmits that transaction to its peers with independent, exponential delays. This approach, known as diffusion in academia, allows network adversaries to link transactions to IP addresses.

Dandelion mitigates this class of attacks by sending transactions over a randomly selected path before diffusion. Transactions travel along this path during the "stem phase" and are then diffused during the "fluff phase" (hence Dandelion). We have shown that this routing protocol provides near-optimal anonymity guarantees among schemes that do not introduce additional encryption mechanisms.

Transaction diffusion in Bitcoin is vulnerable to deanonymization attacks. Because transactions are sent to peers with independent, exponential delays, messages spread through the network in a statistically symmetric manner. This pattern allows colluding spy nodes to infer the transaction source. Breaking this symmetry prevents the attack. However, we have shown that an adversary with knowledge of the network topology can launch a much more effective "fingerprint" attack if the symmetry breaking is not done properly.

Consider a botnet-style adversary with access to the P2P graph. Botnets of size comparable to the Bitcoin P2P network are common and cheap, and these adversaries can learn the network structure with probe messages. We have shown that such an adversary can achieve total deanonymization of the entire network after observing less than ten transactions per node.

Dandelion is a practical, lightweight privacy solution that provides the Bitcoin network formal anonymity guarantees. While other privacy solutions aim to protect individual users, Dandelion protects anonymity by limiting the capability of adversaries to deanonymize the entire network.

In an ideal setting, we have found that a Hamiltonian circuit provides near-optimal privacy guarantees. However, constructing a Hamiltonian circuit through the Bitcoin P2P network in a decentralized, trustless manner is not feasible. Thus, we recommend that each node select two Dandelion destinations uniformly at random without replacement from its list of outbound peers. Our tests have shown that this method provides comparable privacy with increased robustness.

During stem phase routing, there is a question of how to route messages in order to protect privacy. For example, if two Dandelion transactions arrive at a node from different inbound peers, to which Dandelion destination(s) should these transactions be sent? We have found that some choices are much better than others.

Consider the case in which each Dandelion transaction is forwarded to a Dandelion destination selected uniformly at random. This approach results in a fingerprint attack allowing network-level botnet adversaries to achieve total deanonymization of the P2P network after observing less than ten transactions per node.

During a fingerprint attack, a botnet-style adversary with knowledge of the graph structure first simulates transaction propagation. This offline step lets the adversary generate fingerprints for each network node. During the online attack, the adversary collects transactions at its spy nodes and matches these observations to the simulated fingerprints. Our simulations have shown that this attack results in devastating, network-wide deanonymization. 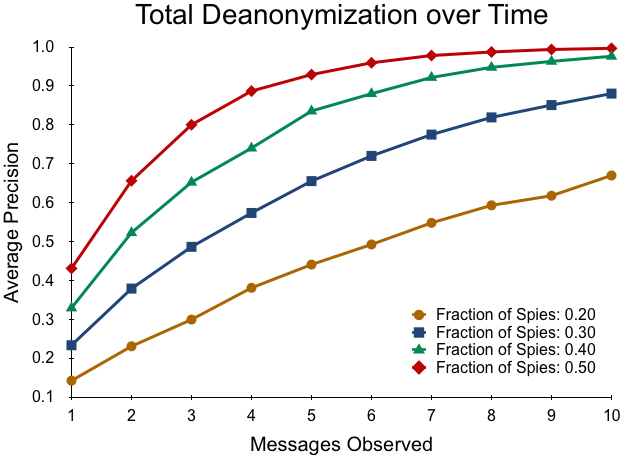 To avoid this issue, we suggest "per-inbound-edge" routing. Each inbound peer is assigned a particular Dandelion destination. Each Dandelion transaction that arrives via this peer is forwarded to the same Dandelion destination. Per-inbound-edge routing breaks the described attack by blocking an adversary's ability to construct useful fingerprints. Fingerprints arise when routing decisions are made independently per transaction at each node. In this case, two transactions from the same node generally take different paths through the network. Crucially, this results in multiple, unique data points that are aggregated to match with a fingerprint.

Dandelion ensures that two transactions from the same node take the same network path, limiting adversaries to the far-left of the graph in Figure 3. In other words, adversary knowledge is limited to the case of one observed message rather than a rich profile of multiple transaction paths. Dandelion also breaks the symmetry of diffusion, making the source of the transaction difficult to infer. 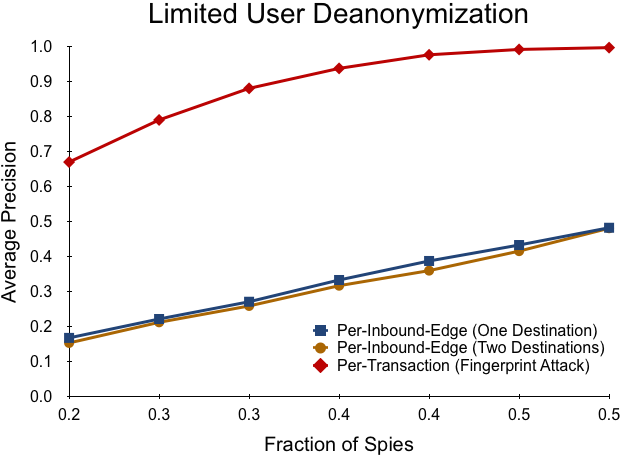 After a transaction has traveled along a Dandelion stem for a random number of hops, it transitions into the fluff phase of routing. The transaction is shared with the network through the existing process of diffusion. In practice, this fluff mechanism is enforced by a weighted coin flip at each node. If the random value is below some threshold, the Dandelion transaction is transformed into a typical transaction. In our testing, we have chosen a probability of ten percent that a given Dandelion transaction enters fluff phase when leaving a given node. This value strikes a good balance between stem path length and transaction spreading latency.

Note that Dandelion's expected precision guarantees are a population-level metric, whereas the expected recall guarantees can be interpreted as an individual-level metric. Expected recall is equivalent to the probability that an adversary associates a single transaction with a given source. These guarantees are probabilistic. They do not address scenarios in which a node has been eclipsed by other nodes, or when a node is specifically targeted by an ISP-like adversary. Individuals who are concerned about targeted deanonymization should still use Tor.

At a high level, Dandelion is like an "anonymity inoculation" for the public at large - including users who are not aware of Bitcoin's privacy issues. Higher adoption leads to greater benefits, even for users who do not use Tor. Early adopters of Dandelion still receive privacy benefits. In the worst case when no neighbors support Dandelion, transactions make at least one hop before diffusing. Note that any solution based only on routing cannot be perfectly anonymous due to the fundamental lower bounds on precision and recall shown in the original Dandelion paper. Dandelion provides near-optimal anonymity guarantees among such solutions.

The map of Dandelion routes is cleared and reconstructed every ten minutes on average. We have chosen the value of ten minutes heuristically in order to make privacy graph learning difficult for adversaries. Note that a Dandelion node may choose a different average shuffle time without splitting from the privacy graph.

A reference implementation is available at the following URL: https://github.com/dandelion-org/bitcoin/tree/dandelion-feature-commits

All features have been compressed into a single commit at the following URL: https://github.com/dandelion-org/bitcoin/tree/dandelion

We would like to thank the Bitcoin Core developers and Gregory Maxwell in particular for their insightful comments, which helped to inform this implementation and some of the follow-up work we conducted. We would also like to thank the Mimblewimble development community for coining the term "stempool," which we happily adopted for this implementation.

To the extent possible under law, the author(s) have dedicated all copyright and related and neighboring rights to this work to the public domain worldwide. This work is distributed without any warranty.

You should have received a copy of the CC0 Public Domain Dedication with this work. If not, see https://creativecommons.org/publicdomain/zero/1.0/ .