Compact blocks on the wire as a way to save bandwidth for nodes on the P2P network.

Historically, the Bitcoin P2P protocol has not been very bandwidth efficient for block relay. Every transaction in a block is included when relayed, even though a large number of the transactions in a given block are already available to nodes before the block is relayed. This causes moderate inbound bandwidth spikes for nodes when receiving blocks, but can cause very significant outbound bandwidth spikes for some nodes which receive a block before their peers. When such spikes occur, buffer bloat can make consumer-grade internet connections temporarily unusable, and can delay the relay of blocks to remote peers who may choose to wait instead of redundantly requesting the same block from other, less congested, peers.

Thus, decreasing the bandwidth used during block relay is very useful for many individuals running nodes. 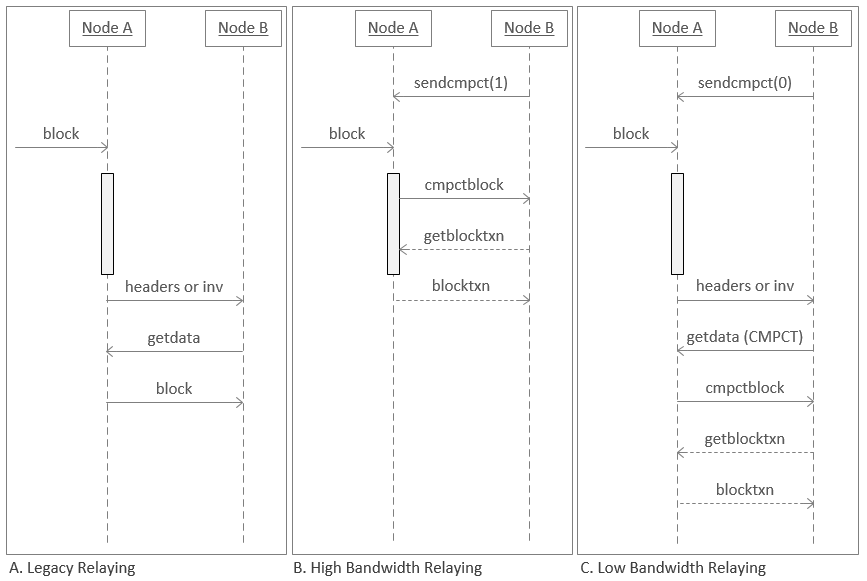 The protocol is intended to be used in two ways, depending on the peers and bandwidth available, as discussed later. The "high-bandwidth" mode, which nodes may only enable for a few of their peers, is enabled by setting the first boolean to 1 in a sendcmpct message. In this mode, peers send new block announcements with the short transaction IDs already (via a cmpctblock message), possibly even before fully validating the block (as indicated by the grey box in the image above). In some cases no further round-trip is needed, and the receiver can reconstruct the block and process it as usual immediately. When some transactions were not available from local sources (ie mempool), a getblocktxn/blocktxn roundtrip is necessary, bringing the best-case latency to the same 1.5*RTT minimum time that nodes take today, though with significantly less bandwidth usage.

The "low-bandwidth" mode is enabled by setting the first boolean to 0 in a sendcmpct message. In this mode, peers send new block announcements with the usual inv/headers announcements (as per BIP130, and after fully validating the block). The receiving peer may then request the block using a MSG_CMPCT_BLOCK getdata request, which will receive a response of the header and short transaction IDs. In some cases no further round-trip is needed, and the receiver can reconstruct the block and process it as usual, taking the same 1.5*RTT minimum time that nodes take today, though with significantly less bandwidth usage. When some transactions were not available from local sources (ie mempool), a getblocktxn/blocktxn roundtrip is necessary, bringing the latency to at least 2.5*RTT in this case, again with significantly less bandwidth usage than today. Because TCP often exhibits worse transfer latency for larger data sizes (as a multiple of RTT), total latency is expected to be reduced even when the full 2.5*RTT transfer mechanism is used.

For the purposes of this section, CompactSize refers to the variable-length integer encoding used across the existing P2P protocol to encode array lengths, among other things, in 1, 3, 5 or 9 bytes. Only CompactSize encodings which are minimally-encoded (ie the shortest length possible) are used by this spec. Any other CompactSize encodings are left with undefined behavior.

Several uses of CompactSize below are "differentially encoded". For these, instead of using raw indexes, the number encoded is the difference between the current index and the previous index, minus one. For example, a first index of 0 implies a real index of 0, a second index of 0 thereafter refers to a real index of 1, etc.

A PrefilledTransaction structure is used in HeaderAndShortIDs to provide a list of a few transactions explicitly.

A HeaderAndShortIDs structure is used to relay a block header, the short transactions IDs used for matching already-available transactions, and a select few transactions which we expect a peer may be missing.

A BlockTransactionsRequest structure is used to list transaction indexes in a block being requested.

A BlockTransactions structure is used to provide some of the transactions in a block, as requested.

Short transaction IDs are used to represent a transaction without sending a full 256-bit hash. They are calculated by:

Compact blocks version 2 is almost identical to version 1, but supports segregated witness transactions (BIP 141 and BIP 144). The changes are:

There have been many proposals to save wire bytes when relaying blocks. Many of them have a two-fold goal of reducing block relay time and thus rely on the use of significant processing power in order to avoid introducing additional worst-case RTTs. Because this work is not focused primarily on reducing block relay time, its design is much simpler (ie does not rely on set reconciliation protocols). Still, in testing at the time of writing, nodes are able to relay blocks without the extra getblocktxn/blocktxn RTT around 90% of the time. With a smart compact-block-announcement policy, it is thus expected that this work might allow blocks to be relayed between nodes in 0.5*RTT instead of 1.5*RTT at least 75% of the time.

There are several design goals for the Short ID calculation:

SipHash is a secure, fast, and simple 64-bit MAC designed for network traffic authentication and collision-resistant hash tables. We truncate the output from SipHash-2-4 to 48 bits (see next section) in order to minimize space. The resulting 48-bit hash is certainly not large enough to avoid intentionally created individual collisons, but by using the block hash as a key to SipHash, an attacker cannot predict what keys will be used once their transactions are actually included in a relayed block. We mix in a per-connection 64-bit nonce to obtain independent short IDs on every connection, so that even block creators cannot control where collisions occur, and random collisions only ever affect a small number of connections at any given time. The mixing is done using SHA256(block_header || nonce), which is slow compared to SipHash, but only done once per block. It also adds the ability for nodes to choose the nonce in a better than random way to minimize collisions, though that is not necessary for correct behaviour. Conversely, nodes can also abuse this ability to increase their ability to introduce collisions in the blocks they relay themselves. However, they can already cause more problems by simply refusing to relay blocks. That is inevitable, and this design only seeks to prevent network-wide misbehavior.

Thanks to the block-header-based SipHash keys, we can assume that the only collisions on links between honest nodes are random ones.

When comparing a given block transaction to the whole set of mempool transactions, there are 5 cases to distinguish:

This means that B = 48 bits short IDs suffice for blocks with up to t = 10000 transactions, mempools up to m = 100000 transactions, with failure to reconstruct at most one in F = 281474 blocks. Since failure to reconstruct just means we fall back to normal inv/header based relay, it isn't necessary to avoid such failure completely. It just needs to be sufficiently rare they have a lower impact than random transmission failures (for example, network disconnection, node overloaded, ...).

The changes to transaction and block relay in BIP 144 introduce separate MSG_FILTERED_ versions of messages in getdata, allowing a receiver to choose individually where witness data is wanted.

This method is not useful for compact blocks because `cmpctblock` blocks can be sent unsolicitedly in high-bandwidth mode, so we need to negotiate at least whether those should include witness data up front. There is little use for a validating node that only sometimes processes witness data, so we may as well use that negotiation for everything and turn it into a separate protocol version. We also need a means to distinguish different versions of the same transaction with different witnesses for correct reconstruction, so this also forces us to use wtxids instead of txids for short IDs everywhere in that case.

Older clients remain fully compatible and interoperable after this change.

Thanks to Gregory Maxwell for the initial suggestion as well as a lot of back-and-forth design and significant testing. Thanks to Nicolas Dorier for the protocol flow diagram.