BIP9 introduced a mechanism for using the version bits to signal support for backwards-compatible changes (soft-forks) using a tally over the previous 2016 blocks computed at re-targeting intervals. It provided for a fixed threshold and non-configurable lock-in interval applicable to all deployments on a chain.

This document describes a generalized signaling scheme which allows each signaling bit to have its own configurable threshold, window size (number of blocks over which it is tallied) and a configurable lock-in period.

It extends the semantics of the signaling bits to cover arbitrary consensus changes, referred to under the general term 'forks'. The same range of version bits is used for signaling.

The states of the BIP9 state machine and its original parameters (name, bit, starttime, timeout) are retained. Some state transition conditions are extended by additional parameters ('threshold', 'windowsize', 'minlockedblocks', 'minlockedtime') to provide for fine-tuning of threshold and grace period.

The Bitcoin protocol requires a flexible scheme for finding consensus on protocol changes, to ensure that it can adapt to the needs of the market and remain competitive as an electronic payment system.

While BIP9 has served the community well for previous deployments, there are some shortcomings in its approach:

A generalized revision of the BIP9 specification can address these issues and satisfy the needs of the market for both soft and hard fork changes as well as more flexible activation thresholds and upgrade (grace) periods.

The proposal should allow more freedom of choice in activation strategies while remaining backward compatible with respect to existing BIP9-based deployments.

The version bits used by this proposal for signaling deployment of forks are referred to as 'signaling bits' or shortened to 'bits' where unambiguous.

The term 'MTP' refers to the 'median time past' which is calculated as the median nTime of a block and its 10 predecessors. It is treated as a monotonic clock defined by a chain, and evaluated on the ancestor of a block, i.e.

As before, a set of configuration parameters SHALL exist for the version bits for each chain supported by an implementation. This permits each bit to be configured independently for each chain (mainnet, testnet, etc.)

The signaling bits SHALL comprise the 29 least significant bits of the nVersion block header field. nVersion is a 32-bit field which is treated as a little-endian integer.

If a block's nVersion does not have its top 3 bits set to 001, all its signaling bits MUST be treated as if they are 0 (see also: 'Tallying' section below).

With each block and fork, we associate a deployment state. The possible states are:

In accordance with BIP9, a block's state SHALL never depend on its own nVersion; only on that of its ancestors.

Each fork deployment is specified by the following per-chain parameters:

If a block's nVersion does not have its top 3 bits set to 001, all its signaling bits MUST be treated as if they are '0'.

A signaling bit value of '1' SHALL indicate support of a fork and SHALL count towards its tally on a chain.

A signaling bit value of '0' SHALL indicate absence of support of a fork and SHALL NOT count towards its tally on a chain.

The signaling bits SHALL be tallied whenever the head of the active chain changes (including after reorganizations). 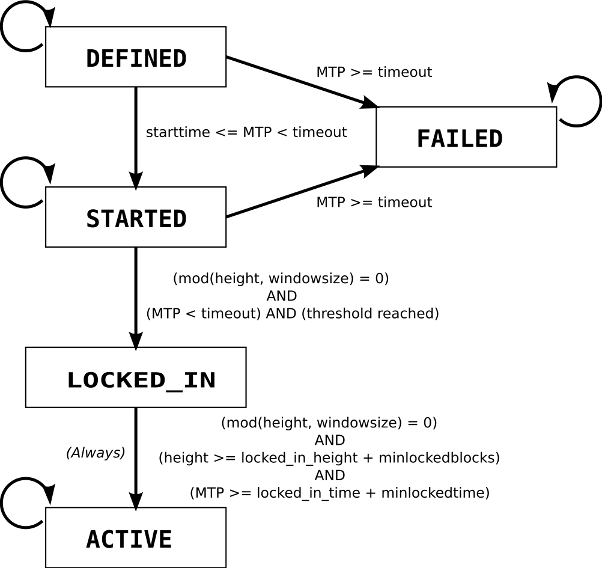 The genesis block of any chain SHALL have the state DEFINED for each deployment.

Once a deployment has STARTED, the signal for that deployment SHALL be tallied over the the past windowsize blocks whenever a new block is received on that chain.

A transition from the STARTED state to the LOCKED_IN state SHALL only occur when all of these are true:

A similar height synchronization precondition SHALL exist for the transition from LOCKED_IN to ACTIVE. These synchronization conditions are expressed by the "mod(height, windowsize) = 0" clauses in the diagram, and have been been added so that backward compatibility with BIP9's use of the 2016-block re-targeting periods can be configured for existing deployments (see above 'Optional full backward compatibility' section).

A transition from LOCKED_IN to ACTIVE state SHALL only occur if the height synchronization criterion is met and two configurable 'grace period' conditions are fulfilled:

NOTE: If minlockedtime and minlockedblocks are both set to 0, then the fork will proceed directly to ACTIVE state once the chain height reaches a multiple of the windowsize.

The ACTIVE and FAILED states are terminal; a deployment stays in these states once they are reached.

Deployment states are maintained along block chain branches. They need re-computation when a reorganization happens.

New consensus rules deployed by a fork SHALL be enforced for each block that has ACTIVE state.

An implementation SHOULD notify the operator when a deployment transitions to STARTED, LOCKED_IN, ACTIVE or FAILED states.

It is RECOMMENDED that an implementation provide finer-grained notifications to the operator which allow him/her to track the measured support level for defined deployments.

An implementation SHOULD warn the operator if the configured (emitted) nVersion has been overridden to contain bits set to '1' in contravention of the above non-signaling recommendations for DEFINED forks.

It is RECOMMENDED that an implementation warn the operator if no signal has been received for a given deployment during a full windowsize period after the deployment has STARTED. This could indicate that something may be wrong with the operator's configuration that is causing them not to receive the signal correctly.

For undefined signals, it is RECOMMENDED that implementation track these and alert their operators with supportive upgrade notifications, e.g.

Since parameters of these deployments are unknown, it is RECOMMENDED that implementations allow the user to configure the emission of such notifications (e.g. suitable N and M parameters in the messages above, e.g. a best-guess window of 100 blocks).

The getblocktemplate features introduced in BIP9 remain in effect unmodified.

The timeout into FAILED state allows eventual reuse of bits if a fork was not successfully activated.

A fallow period at the conclusion of a fork attempt allows some detection of buggy clients, and allows time for warnings and software upgrades for successful forks. The duration of a fallow period is not specified by this proposal, although a conventional fallow period of 3 months is RECOMMENDED.

Due to the constraints set by BIP 34, BIP 66 and BIP 65, there are only 0x7FFFFFFB possible nVersion values available. This limits to at most 30 independent deployments. By restricting the top 3 bits to 001 we we are left with 29 out of those for the purposes of this proposal, and support two future upgrades for different mechanisms (top bits 010 and 011).

The following guidelines are suggested for selecting the parameters for a fork:

NOTE: If minlockedtime and minlockedblocks are both set to 0, then the fork will proceed to ACTIVE state when the chain height reaches a multiple of the windowsize.

A later deployment using the same bit is possible as long as the starttime is after the previous fork's timeout or activation, but it is discouraged until necessary, and even then recommended to have a pause in between to detect buggy software.

An implementation SHOULD signal '0' on a bit if one of the following holds true:

An implementation SHOULD enable the operator to choose (override) whether to signal '0' or '1' on a bit, once its deployment has at least reached the STARTED state.

An implementation SHOULD warn the operator if the configured (emitted) nVersion has been overridden to contain bits set to '1' in contravention of the above non-signaling recommendations.

A supporting miner SHOULD signal '1' on a bit for which the deployment is LOCKED_IN state so that uptake is visible. However, this has no effect on consensus rules. Once LOCKED_IN, a deployment proceeds to ACTIVE solely based on the configured grace period parameters (see 'Fork deployment parameters' above).

A miner SHOULD signal '0' on a bit if they wish to suspend signaling of support for a fork that is DEFINED in their software.

It is NOT RECOMMENDED to signal '1' for bits where the meaning is undefined (i.e. bits which are unclaimed by proposals).

This section lists parameter values which can be used to effect compatibility with the existing BIP9 versionbits state machine.

As this BIP is not itself consensus-relevant (Information like BIP9), it can be rolled out without the use of a BIP9 fork bit.

Backward compatibility through judicious fork configuration parameters should ensure that it does not interfere with existing known deployments.

By way of design it does not interfere with unknown (undefined) deployments.

A working reference implementation, including tests, can be found in these Pull Requests:

Existing unit tests and regression tests have been left active to demonstrate backward compatibility of the default settings with BIP9.

This BIP is dual-licensed under the Creative Commons CC0 1.0 Universal and GNU All-Permissive licenses.