This BIP defines a new witness program type that uses a Merkle tree to encode mutually exclusive branches in a script. This enables complicated redemption conditions that are currently not possible, improves privacy by hiding unexecuted scripts, and allows inclusion of non-consensus enforced data with very low or no additional cost.

The BIP16 (Pay-to-script-hash, "P2SH") fixes the first 3 problems by using a fixed-length 20-byte script hash in the scriptPubKey, and moving the responsibility for supplying the script to the redeemer. However, due to the data push size limit in script, a P2SH script may not be bigger than 520 bytes. Also, P2SH still requires the redeemer to publish all unexecuted branches of the script.

The BIP141 defines 2 new types of scripts that support segregated witness. The pay-to-witness-script-hash (P2WSH) is similar to P2SH is many ways. By supplying the script in witness, P2WSH restores the original 10,000 byte script limit. However, it still requires publishing of unexecuted branches.

The idea of Merkelized Abstract Syntax Tree (MAST) is to use a Merkle tree to encode branches in a script. When spending, users may provide only the branches they are executing, and hashes that connect the branches to the fixed size Merkel root. This reduces the size of redemption stack from O(n) to O(log n) (n as the number of branches). This enables complicated redemption conditions that is currently not possible due to the script size and opcode limit, improves privacy by hiding unexecuted branches, and allows inclusion of non-consensus enforced data with very low or no additional cost.

To redeem an output of this kind, the witness must consist of the following items:

Metadata is the last witness item. It is a vector of 1 to 5 bytes. The first byte is an unsigned integer between 1 to 255 denoting the number of Subscript (defined hereinafter). The following 0 to 4 byte(s) is an unsigned little-endian integer denoting the MAST version. MAST Version must be minimally encoded (the most significant byte must not be 0).

Path is the second last witness item. It is a serialized Merkle path of the Script Hash (defined hereinafter). Size of Path must be a multiple of 32 bytes, and not more than 1024 bytes. Each 32 byte word is a double-SHA256 merkle node in the merkle branch connecting to the Script Root (defined hereinafter). Depth of the tree (0 to 32) is the size of Path divided by 32.

Position is the third last witness item. It indicates the location of the Script Hash in the Merkle tree, with zero indicating the leftmost position. It is an unsigned little-endian integer with not more than 4 bytes. It must be minimally encoded: the value must not be larger than the maximum number of items allowed by the Depth of the tree, and the most significant byte must not be 0. For example, if Depth is 4, the valid range of Position is 0 to 15 (24-1).

Depends on the first byte of Metadata, there should be 1 to 255 Subscript witness item(s) before Position.

Script Hash is defined as:

where Y is a 1-byte value denoting number of Subscript, followed by the hash of each Subscript

MAST Root is H(MAST Version|Script Root). The pre-image has a fixed size of 36 bytes: 4 bytes for MAST Version (unsigned little-endian integer) and 32 bytes for Script Root.

The script evaluation fails if MAST Root does not match the witness program.

If the MAST Root matches the witness program and MAST Version is greater than 0, the script returns a success without further evaluation. SigOpsCost is counted as 0. This is reserved for future script upgrades.

If the MAST Version is 0, the Subscript(s) are serialized to form the final MAST Script, beginning with Subscript_1. The unused witness item(s) before the Subscript_1 are used as Input Stack to feed to the MASTScript. (Similar to P2WSH in BIP141)

The script fails with one of the following conditions:

The MAST Script is then evaluated with the Input Stack (with some new or redefined opcodes described in BIPXXX). The evaluation must not fail, and result in an exactly empty stack.

Counting of SigOpsCost is based on the MAST Script, described in BIPYYY.

This proposal is a restricted case of more general MAST. In a general MAST design, users may freely assign one or more script branches for execution. In this proposal, only one branch is allowed for execution, and users are required to transform a complicated condition into several mutually exclusive branches. For example, if the desired redeem condition is:

In a general MAST design, the 7 branches (A to G) will form a 3-level Merkle tree, plus an "overall condition" describing the relationship of different branches. In redemption, the "overall condition", executed branches (e.g. B, D, F), and Merkle path data will be provided for validation.

In the current proposal, the user has to transform the redeem condition into 12 mutually exclusive branches and form a 4-level Merkle tree, and present only one branch in redemption:

One way to implement the general MAST design is using a combination of OP_EVAL, OP_CAT, and OP_HASH256. However, that will suffer from the problems of OP_EVAL, including risks of indefinite program loop and inability to do static program analysis. A complicated implementation is required to fix these problems and is difficult to review.

The advantages of the current proposal are:

The are some disadvantages, but only when the redemption condition is very complicated:

This proposal allows users to indicate the version of scripting language in the witness, which is cheaper than doing that in scriptPubKey or scriptSig. Undefined versions remain anyone-can-spend and are reserved for future expansions. A new version could be used for relaxing constraints (e.g. the 10,000 bytes size limit of MAST Script), adding or redefining opcodes, or even introducing a completely novel scripting system.

In version 0 MAST, the extra hashing operations in calculating the MAST Root are counted towards the 201 nOpCount limit to prevent abusive use. This limitation is not applied to undefined MAST Version for flexibility, but it is constrained by the 255 Subscript and 32 Depth limits.

This proposal requires script evaluation resulting in an empty stack, instead of a single TRUE value as in P2WSH. This allows each party in a contract to provide its own Subscript, and demonstrate the required Input Stack to clean up its own Subscript. In this case, order of the Subscript is not important since the overall objective is to clean up the stack after evaluation. 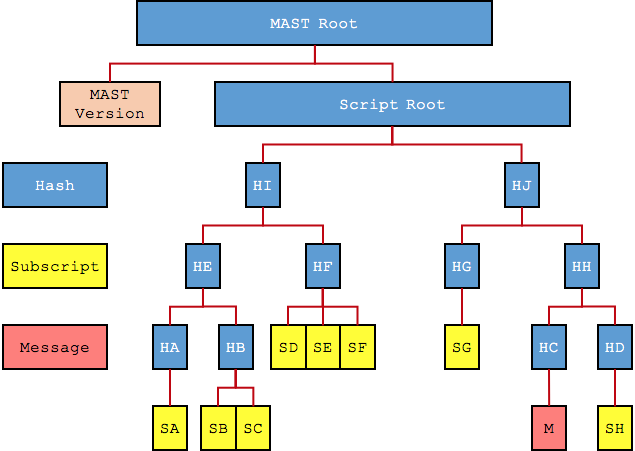 The scriptPubKey with native witness program is:

To redeem with the SD|SE|SF branch, the witness is

When constructing a MAST, if the user believes that some of the branches are more likely to be executed, they may put them closer to the Script Root. It will save some witness space when the preferred branches are actually executed.

The following is the "Escrow with Timeout" example in BIP112:

Using compressed public key, the size of this script is 150 bytes.

With MAST, this script could be broken down into 2 mutually exclusive branches:[2]

Since only one branch will be published, it is more difficult for a blockchain analyst to determine the details of the escrow.

The following is the "Hashed TIme-Lock Contract" example in BIP112:

To create a MAST Root, it is flattened to 3 mutually exclusive branches:

which significantly improves readability and reduces the witness size when it is redeemed.

The current CHECKMULTISIG supports up to 20 public keys. Although it is possible to extend it beyond 20 keys by using multiple CHECKSIGs and IF/ELSE conditions, the construction could be very complicated and soon use up the 10,000 bytes and 201 nOpCount limit.

With MAST, large and complex multi-signature constructs could be flattened to many simple CHECKMULTISIGVERIFY conditions. For example, a 3-of-2000 multi-signature scheme could be expressed as 1,331,334,000 3-of-3 CHECKMULTISIGVERIFY, which forms a 31-level MAST. The scriptPubKey still maintains a fixed size of 34 bytes, and the redemption witness will be very compact, with less than 1,500 bytes.

Currently, committing non-consensus enforced data in the scriptPubKey requires the use of OP_RETURN which occupies additional block space. With MAST, users may commit such data as a branch. Depends on the number of executable branches, inclusion of such a commitment may incur no extra witness space, or 32 bytes at most.

An useful case would be specifying "message-signing keys", which are not valid for spending, but allow users to sign any message without touching the cold storage "funding key".

This BIP depends on BIP141 and will be deployed by version-bits BIP9 after BIP141 is enforced. Exact details TBD.

The idea of MAST originates from Russell O’Connor, Pieter Wuille, and Peter Todd.